How far can a man travel
under his own power
in one day? 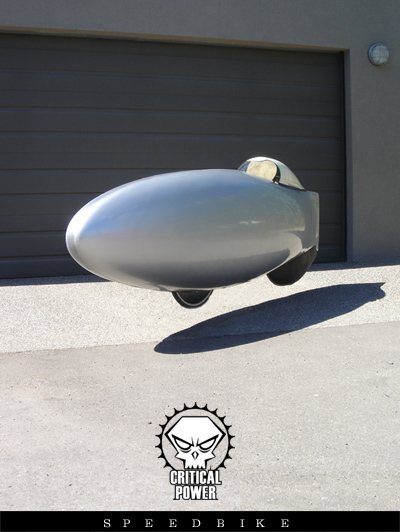 Greg Kolodziejzyk is a retired entrepreneur on a mission to break the existing 24 hour human powered distance record of 1021.36 km set in 1995. That's almost the distance from a snow shovel in Calgary to a palm tree in California. He has exactly 24 hours to do it and it will be strictly under his own power. No wind or stored energy of any sort allowed.

Greg designed and built a custom carbon fiber bicycle called "Critical Power". More appropriately called a "Human powered vehicle", Critical Power is a two wheeled recumbent bicycle encapsulated by a bullet-like streamlined body called a fairing. The sleek body was computer designed for maximum aerodynamic efficiency by Ben Eadie of Mountain-wave.ca. CP is capable of achieving speeds in excess of 100 km per hour and was built to maintain a cruising speed of 50 kph on a flat road with effort levels that would see a paltry 20 kph on a typical mountain bike.

The actual record attempt will be held on a closed track in Eureka, California some time within the next few months. The record attempt is sanctioned and recognized by the International Human Powered Vehicle Association (http://www.ihpva.org) who set the rules and monitor the event.

Greg believes that a vigorous, active lifestyle plays a HUGE role in the general health and psychological well being of every individual. We live in an automobile dominated, convenience food world and, unfortunately, physical activity is the first thing neglected. As a society, our reliance on burning fossil fuels to drive the kids down the street is disturbing. Aside from the obvious ecological costs of our passivity, the lack of physical activity is costing us BILLIONS in increased health care obligations every year, warns Greg. His hope is to inspire others to get up, get out and get moving.

It is his goal to direct attention to these pressing issues by combining an extreme physical challenge with innovative, cutting-edge green technology. "I would really just love to remind everyone about that bike in the garage. Dust it off and get out there and ride it - You'll be amazed at how great you'll feel". More on Greg's message here. 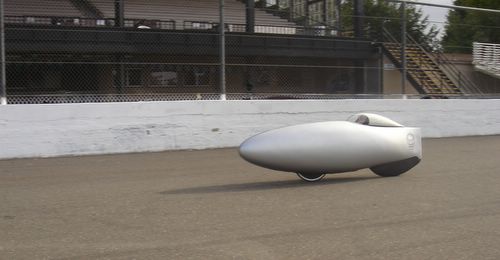 Critical Power Speedbike cruising at 60 kph around the race track in Eureka, Ca.

The 24 hour human powered distance record of 1021.36 kilometers was set in 1995 by Axel Fehlau in Cologne, Germany with the M5 Carbone streamliner on an indoor 200 meter velodrome track. The previous record of 1003 km was set by Myhee in 1993 at the race track in Eureka, Ca. A list of all human powered vehicle (HPV) records is here.

I believe that setting a new record for the 24 is within my capabilities, but by no means do I think it is going to be easy. When we do the math, we discover that an averagely decent streamliner with a drag coefficient of .3 (sq ft) can go farther than 1021 km in 24 hours on only 110 watts of human power (enough effort to go 15 kph or 9 mph on a mountain bike). But what most people don't realize is that it is difficult to end with an overall finishing average of 110 watts after an ENTIRE 24 hour period. When the cyclist stops peddling, his watt average declines dramatically! Taking short breaks and occasionally coasting would mean that one really needs to average 140 to 150 watts, just in order to end up with an average of 110 !!

And further, add to the fact that the rider is cooped up in a tight fitting carbon fiber shell looking through a thin piece of scratched up pop bottle plastic - well, you get the idea. Maintaining high power output for 24 hours in a streamliner is very difficult for many reasons. You need to stop to replenish your food and hydration supplies, for clothing changes as the daily temperature fluctuates, to stretch, and to deal with bathroom requirements. Unfortunately, the clock doesn't stop when you stop.

The average healthy human has the ability to maintain less than 50 watts on an upright road bike for 24 hours, but trained first-class athletes can maintain 200 watts. I am probably somewhere around 130 watts in the recumbent position, and 150 to 170 in the upright road bike position. Remember, these wattage values are finishing averages. To end up with a finishing average of 130 watts, a constant 150 to 160 watts are required as often as possible.

The most optimistic scenario would be an average of 140 watts of power over a 23 hour period (allowing 1 hour for breaks, stops, 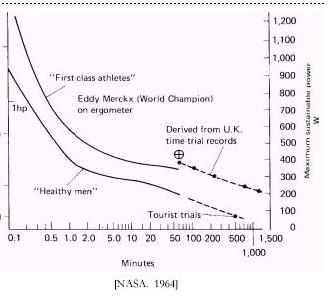 etc) in the Critical Power streamliner resulting in a potential of 1200 km which is 120 km over the existing record. At a minimum, If I can maintain an average of only 100 watts for 23 hours allowing for 2 hours of planned and unplanned stops, it would net me about 1030 km which would still result in a new record.

My 15-20 hour training week consists of one long endurance ride that slowly increases in duration to a maximum of 15 hours per ride. I also do one, 2 hour high-intensity tempo training session per week, and fill the rest of the days in with fat burning and recovery rides of 1 to 2 hour durations.

My first attempt at the record was at the NCAT test track in Opelika, Alabama on November 25th, 2005. I cycled 828.4 km (515 miles) in 20 hours, 22 minutes before I had to quit because of mechanical problems. The full record attempt report is here. 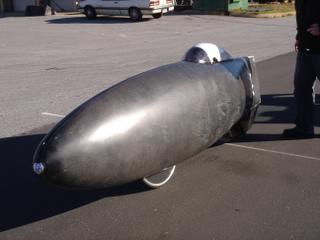 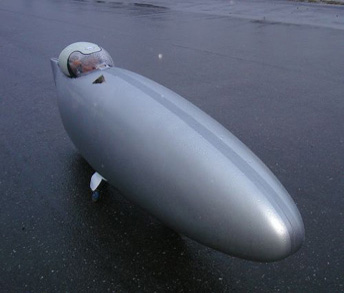 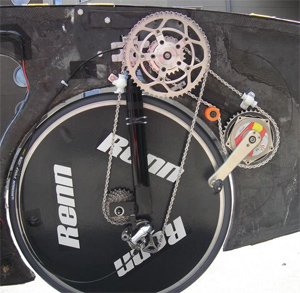 The chassis of Critical Power is a carbon fiber recumbent bicycle also known as a short wheel base, remote steered, front wheel drive lowracer. The frame was constructed from a single piece of carbon fiber sandwich board, then the frame shape was cut-out of the board. The edges were laminated, and the components were installed with aluminum brackets.

We ran finite element analysis stress calculations to determine where the frame needed to be reinforced for maximum strength and stiffness, then reinforced those areas with additional carbon fiber.

The front wheel is a 650 cm carbon fiber disc wheel that fits between my legs. It is driven with 155 mm cranks that hold a special meter called an SRM power meter used to measure the amount of power in watts that I am applying to the peddles. I use this to control and evenly spread-out my effort throughout the 24 hour period. The crank turns a 39 tooth chain ring that drives a small 24 tooth chain ring on a mid-drive. The large ring on the mid drive is 54 teeth which runs down to a standard 9 speed gear cassette on the front wheel. The purpose of the mid drive is to allow me to turn the front wheel (to steer) and drive the wheel at the same time. The other purpose for the mid drive is to step-up the gearing - with the aerodynamic fairing body on, the bike can go very fast with very little power. In the top gear, I can go 60 kph (37 mph) at 80 rpm cadence with 160 watts of power input.

The rear wheel is a 700 cm carbon fiber disc wheel that spins inside an enclosed wheel shroud. This is more efficient because the spinning wheel does not 'churn' air around as much as an exposed wheel would. Both the front and rear tires are high pressure, low rolling resistance clincher tires (Michellin Pro 2 Race). 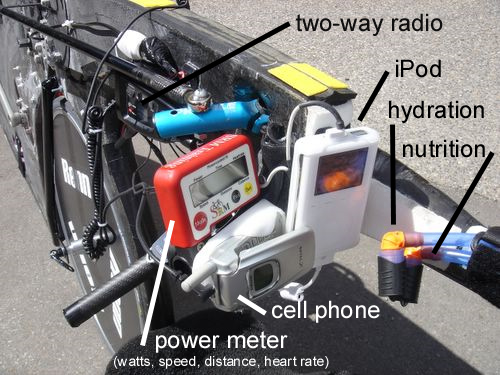 The cockpit of Critical Power is very crowded! I communicate to my support crew via a ChatterBox motorcycle two-way radio system. I can make or receive cell phone calls through the radio, as well as listen to music. Behind the seat are two 3 liter water bags with feeding tubes that are mounted directly in front of my mouth. One holds enough water for about 3 hours, the other holds 3 hours worth of food in the form of Boost - a meal replacement drink.

When the streamliner body is on CriticalPower, there is no way I can balance by putting my feet on the ground when starting or stopping. I accomplish this with a telescopic landing gear. I pull a handle attached to a cable below my seat on the right hand side of the frame which pushes a wheel through an opening hatch on the fairing body. A leg with a roller blade wheel telescopes down and I can lock it in place with the pull cable handle. 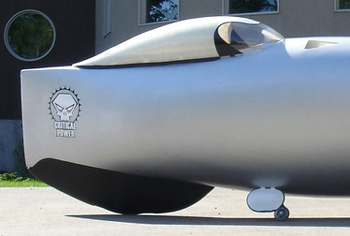 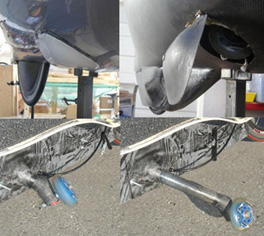 When 'taking-off' I simply 'taxi' on three wheels until I am moving at least 5 to 10 kph, then jerk the steering wheel to the right which lifts the bike off of the landing gear wheel. Then I retract the gear by releasing the pull cable which is pulled in with a bungie elastic cord. Once the gear leg has been retracted, I close and lock the landing gear hatch door with another cable. To "land", I slow down to about 10 kph, open the landing gear hatch door, extend the gear leg and lean to my right. The bike falls over onto the gear and I coast to a safe stop.

The Critical Power streamliner body was designed by Ben Eadie of Mountain-wave.ca using a state of the art computer 'computational flow dynamics' application. Ben designed the fairing shell to have a drag coefficient that would allow me to achieve at least 50 kph on less than 130 watts of power. 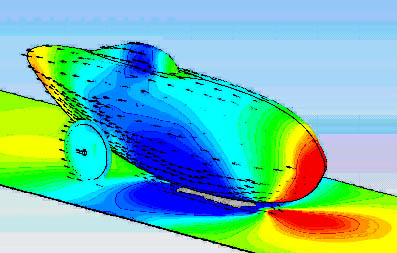 Using the computer model, the mold for the fairing shells was machined with a large 5 axis CNC machine out of a 3 thousand pound block of wood. The shells are made from 2 layers of carbon fiber for strength and lightness plus one inside layer of kevlar to protect me from carbon shards if I were to crash. To stiffen the shells, we added narrow carbon covered foam ribs on the inside. 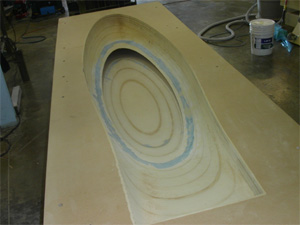 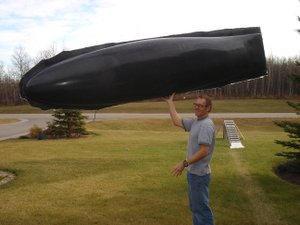 Fresh air intake is through a NACA duct in the top of the fairing shell via a tube that is directed to my face. If the windshield fogs up, I can lift the canopy bubble slightly to allow more air to enter from the under the front windshield. The canopy bubble was vacuum formed from a 1/16" thick sheet of PETG plastic - the same plastic they make pop bottles from. The canopy bubble is reinforced with 2 layers of fiberglass on the inside.

Critical Power human powered vehicle is one of the most energy efficient vehicles in the world. With a drag coefficient of .25 (CdA sq ft), wheel rolling resistance of .0050 (Crr) and weight of 70 pounds, if it were equipped with a high efficiency gas engine, it could be capable of over 10,000 miles per gallon! (Estimated from Shell eco-marathon vehicle data). 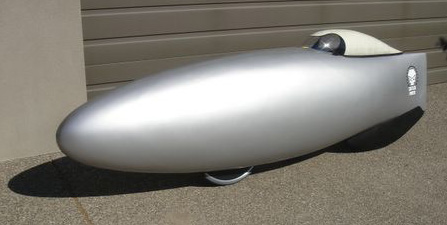 Here is a chart comparing the efficiency of Critical Power to some more common human powered vehicles:

Photos and videos of Critical Power:
(click on the photo to enlarge)